International conference on Cultural Encounters through Reading and Writing: New Approaches to the History of Literary Culture, organized by Hera Travelling TexTs at the Glasgow Women’s Library, 9-11 june 2016. 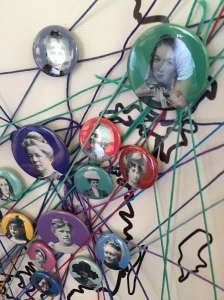 Several aspects of the transnational reception of European women writers, from Spain to Slovenia, Turkey to Finland, were illuminated during the three day conference.

With a point of departure in the case of the romantic poet Julia Nyberg, Gunilla Hermansson discussed the overlapping fields of recycled, superficial (secondary and rudimentary) knowledge of other literatures and the canonizing processes involved in the writing of literary histories or editing anthologies of poetry – and suggested a parallel between modern distant reading and the 19th century translators and editors methods of dealing with large scale data. Åsa Arping problematized the unfixed forms of literary reviews during the 19th century and demonstrated the all pervading pattern of rewriting, recycling and remediation through recurring patterns, topoi and ‘biographemes’ in the American reception of Fredrika Bremer’s novel Hertha (1856). For a writer such as Anne Charlotte Leffler, who wrote fiction and plays in the late 19th century as part of the Scandinavian Modern Breakthrough, Birgitta Johansson Lindh suggested new social movement theory as a productive and necessary tool for a fuller understanding of a more specialized reception within European radical movements.

The presentations were followed by lively discussions, in which Yvonne Leffler also contributed with aspects of her research on the vast translational reception of the novelist Emelie Flygare-Carlén.

Watch the video from the conference:  http://travellingtexts.huygens.knaw.nl/?p=801

Great 1st panel by Swedish wwriters on export project: they question what we talk about when talking about literature #Herattt